A series of funny, touching and surprising encounters take place one night among the diverse passengers of a London night bus. 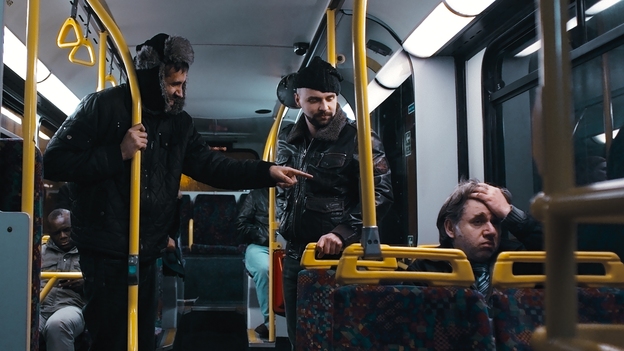 A double-decker bus weaves through London’s rain-glistened, near-deserted night streets. Gradually we meet the people onboard, of all different ages and nationalities: competitive work colleagues and jaded partners; loud drunks and cheeky fare dodgers; a long-suffering driver and random strangers who strike up the unlikeliest of conversations. Even if you’ve never taken a London night bus (though especially if you have), big city dwellers will recognise the ebb and flow of a bustling metropolis’ nocturnal rhythms and the often-enforced intimacy of public transport. Beautifully shot, with an evocative score, writer-director Simon Baker backs his perceptive, very funny script with a revolving cast of largely unknown but assured performers. Together they’ve arrived with an impressive, truly independent British film – a fascinating snapshot of modern London on the move in all its defiant, cussed and vibrant diversity. It’s a ride well worth getting onboard.