A free-form love letter to the pleasures of wasting time, this episodic comedy is a mash-up of 90s nostalgia and arthouse homage. 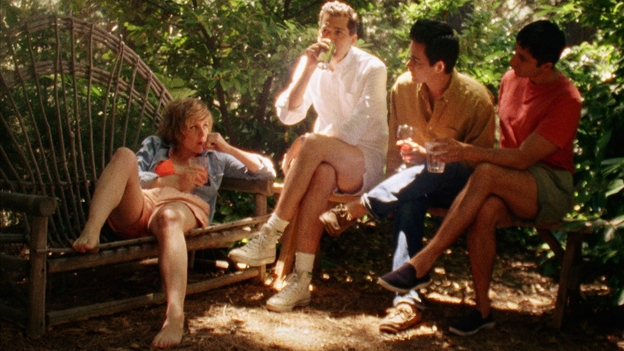 Set in 1992-93, this episodic comedy is a mash-up of 90s nostalgia and arthouse homage that is – according to directors Lev Kalman and Whitney Horn – best understood as a collection of juxtaposing ‘vibes’. Following a group of young graduates hell-bent on vacationing in the most ‘mellow’ manner possible, the film is a free-form love letter to the pleasures of wandering intellectual musings (on race, alternate universes and the ‘bebop jazz basketball’ of Michael Jordan), whilst wasting time taking naps, smoking nutmeg and having denim fashion shows. The film’s (genuine) 16mm ‘vibes’ take in the films of Eric Rohmer and Whit Stillman by way of Baywatch, Melrose Place and Twin Peaks, all set to an original electronic score that perfectly evokes the characters’ mixture of nostalgia, introspection and apathy. Appearances by filmmakers Mati Diop and Gabriel Abrantes among a cast of non-actors bring another layer of meta-cool to proceedings.