The diversification of an all-black residence hall forces a group of African-American university students to take a stand on their own cultural beliefs and identities. 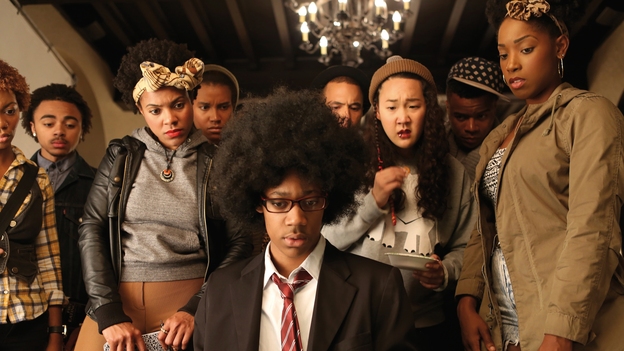 Trouble is brewing at prestigious Ivy League Winchester University. The sole black-only residence hall is to be diversified, to the disgust of firebrand campus DJ Sam White (caustic host of ‘Dear White People’). So when Sam becomes hall president and word spreads of a rival white residence hall’s ‘African-American-themed party’, she and her fellow black students must reassess where they belong in an alleged ‘post-racial’ Obama nation... Whereas many films that tackle Issues reduce their characters to mouthpieces, Justin Simien’s razor-sharp satire makes all his protagonists thrillingly nuanced and conflicted. Visually inventive (the fourth wall regularly takes a pummelling) yet controlled, it’s in the idea stakes that Simien really lets fly, nailing cultural preconceptions of all colours. Early Spike Lee comparisons – notable School Daze and Do The Right Thing – are inevitable and somewhat courted, but Simien passionately makes his own case for provocative, relevant filmmaking: we’ve gotta have it.