Sixty years young, this British cartoon of George Orwell’s political ‘fairy story’ is still the most abiding adaptation of this powerful, cautionary tale for all ages. 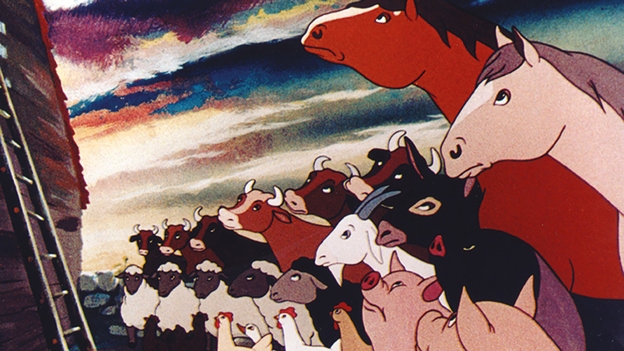 What would happen if the animals took over the farm? With the farmer gone the pigs take control. All animals are equal, but are some more equal than others? George Orwell’s novella is famous as a political allegory, but it only works as such because it is also an engaging story. Sixty years young, this is still the most abiding adaptation of this powerful, cautionary tale. Produced by John Halas and Joy Batchelor, this was Britain’s first animated feature film.

This screening will be followed by:

The History of the Cinema

A stylish and funny poke-in-the eye of the cinema industry, from its earliest developments to a vision of the future.

A cartoon warning of the pursuit of relentless progress over common sense, which tempers a dystopian vision with much humour.