One of this year’s breakout indie films, hot out of Sundance. Thoughtful and heartfelt. 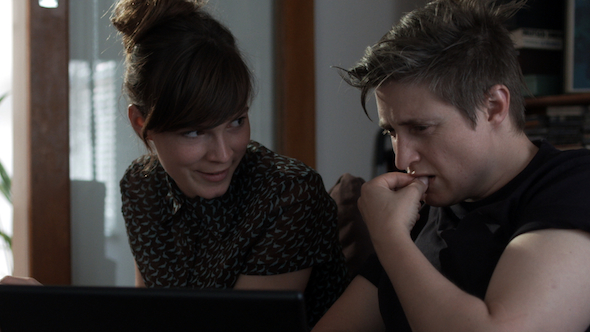 With a teenage daughter growing up fast and a grown-up brother behaving like a teenager, Jane is the lynchpin of the family – solid, dependable Mum. Things are about to change radically. Having put it off for years, Jane is finally going to transition from female to male and become James. Needing to focus, James takes extended ‘me time’ and his daughter, Billie, goes to live with her dad for a year. James and Billie agree to see each other every Tuesday during this time but, as he transitions, James becomes less emotionally available to Billie, who meanwhile is exploring her own identity and sexuality. One thing’s for sure, they don’t tell each other everything anymore. 52 Tuesdays was shot consecutively over a year of real-life Tuesdays with the non-professional cast given their scripts one week at a time and only given the scenes that they appear in. These strict rules provide a unique framework in which to explore change over time and how transition, whether to another gender or into adulthood, affects all those around us. This structurally inventive, sensitively observed drama scooped a best director award at Sundance for Sophie Hyde (who produced Shut Up Little Man! An Audio Misadventure) and is heavily tipped to be one of this year’s indie breakout titles. We’re thrilled to present 52 Tuesdays as our Closing Night film.

Tickets for the Opening Night screenings of Lilting are subject to a ballot for BFI Members.

The ballot is now closed.