Kubrick’s violent, ultra-stylised sci-fi is a landmark in modern cinema.

‘The only movie about what the modern world really means’ – Luis Buñuel. Kubrick’s adaptation of Anthony Burgess’ decline-of-civilisation novel remains a chilling, thrilling and unsettling cinematic vision of nihilistic violence and social control. It was so controversial upon its release that it was withdrawn by Kubrick himself, and not seen again in the UK until after his death in 1999. Set in a flamboyantly stylised near-future where gangs of disenfranchised teenagers indulge in narcotic cocktails and revel in acts of ‘ultraviolence’, the film centres on Alex (McDowell) and his band of droogs. With A Clockwork Orange Kubrick was striving to deconstruct classic Hollywood narratives and create a cinema that behaved like music – in doing so he created a new, viscerally disturbing mode of storytelling.

Bring along your ticket from A Clockwork Orange to Stanley Kubrick: The Exhibition at The Design Museum to get 30% off at the box office.

BFI recommends Study media at A Clockwork Orange campus Are you the next Kubrick? You and your droogs should be studying media at Brunel… 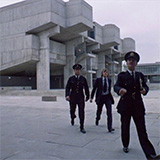