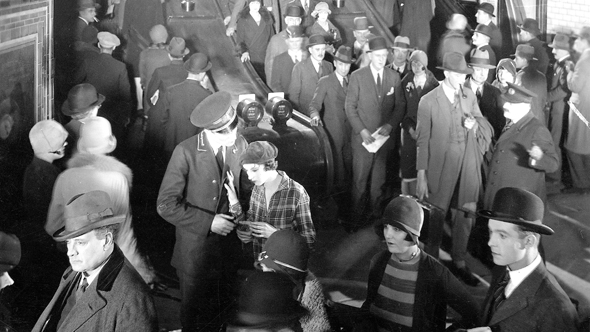 Year: 1928 Production Country: UK Directed by: Anthony Asquith Distributed by:  A BFI release Running time: 94min Certificate: U The restorarion of Underground was made possible by the generous support of Simon W Wessel.

Celebrate the 150th anniversary of the London Underground with the BFI’s restoration of Anthony Asquith’s subterranean tale of love, jealousy and murder.

We celebrate the 150th anniversary of the London Underground with the BFI’s restoration of Anthony Asquith’s subterranean tale of love, jealousy and murder. Neil Brand’s orchestral score, recorded live last year, perfectly complements the film’s richly detailed evocation of 1920s London. More than any other film from Britain’s silent canon, Underground (introducing itself as a ‘story of ordinary workaday people whose names are just Nell, Bill, Kate and Bert’) evokes the life of the ordinary Londoner with its scenes of the bustling Underground – the behaviour of the passengers is strikingly familiar – and the capital’s parks, double-decker buses, pubs and shabby bedsits. From his own screenplay Asquith balances the light and dark sides of city life, aided by a superb cast of Brian Aherne and Elissa Landi as the nice young lovers and Norah Baring and Cyril McLaglen as their unhappy counterparts. The 26-year-old’s direction is assured, efficient and spare, with some remarkably cinematic flourishes, clearly inspired by contemporary German and Russian filmmaking but with a few tricks of his own, climaxing with a thrilling chase scene across the rooftops of the Lots Road power station. He was one of few in the British industry to match the audacity of Hitchcock. Bryony Dixon