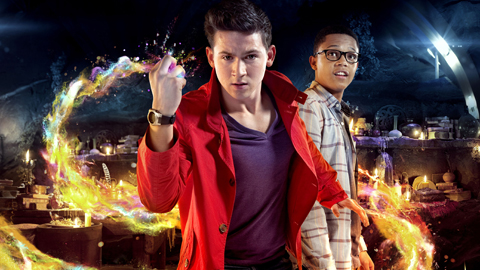 Wizards Vs Aliens brings magic and sci-fi together to tell an epic tale. Aliens are intent on devouring all the magic on Earth - one 16-year-old boy stands in their way. Tom Clarke is a seemingly ordinary boy who loves football. He lives with his dad Michael and grandmother Ursula in an ordinary house in an ordinary street - but there's something different about Tom  - his family are Wizards! When the alien Nekross arrive on Earth hungry for magic, there's big, big trouble in store for all wizardkind. With the help of his friend Benny, Tom must stop them - but will these two unlikely heroes succeed, or will there be disastrous results for the whole planet? The new family TV series from Russell T Davies and Phil Ford has been widely anticipated by fans of Doctor Who and The Sarah-Jane Adventures over the past year.

We are thrilled to give you a sneak preview of the first 2 episodes and introduce you to some special including Co-Producer/Co-Creator Phil Ford and actors Scott Haran, Manpreet Bambra, Michael Higgs, Percelle Ascott, and Annette Badland. Sadly, Brian Blessed will no longer be able to join us for this screening as he has to honour a last minute work commitment.