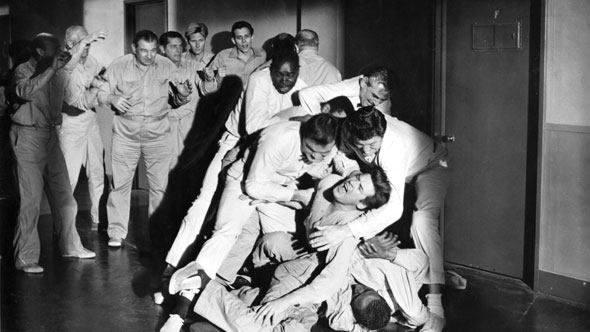 A sane man gradually goes mad when investigating a murder at an asylum. Read more

Samuel Fuller’s lurid tale of a sane man whose infiltration into an asylum drives him mad caused the BBFC’s John Trevelyan to worry that its ‘unjustified and alarmist’ tone might instigate imitative behaviour and frighten those with incarcerated relatives. History here proves that one man’s exploitation knock-off is another man’s classic: Fuller prefigures the 1960s anti-psychiatry movement and films such as One Flew Over the Cuckoo’s Nest – though Shock Corridor itself was originally banned.

Preservation funded by the Film Foundation and the Hollywood Foreign Press Association.