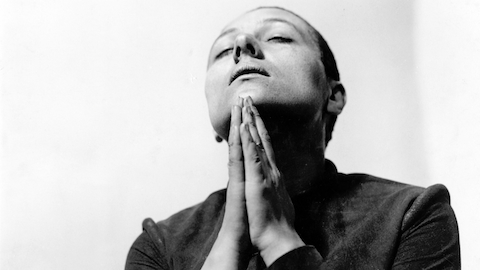 Carl Dreyer's captivating and deeply moving biopic, featuring one of the most powerful performances ever captured on film. Read more

Overwhelming in its intensity, Dreyer’s captivating and deeply moving silent masterpiece famously boasts one of the most powerful performances ever captured on film in Maria Falconetti’s portrayal of Joan of Arc, facing trial and execution for heresy. Interestingly, the film has dropped in and out of the critics’ poll top ten over the years; it was there in 1952, 1972 and 1992, but not in the other years. It’s back in this year’s top ten, but where will it rank?

Please note that these will be the first public screenings of a brand new digital restoration of Dreyer’s film. It was restored using the Danish Film Institute's preservation materials of the original Danish version, with Dreyer’s own Danish intertitles still intact; this means that the new version is the closest yet to the film which had its Copenhagen premiere in 1928. The new restoration will be released on Blu-Ray/DVD by Eureka’s Masters of Cinema label in November.

BFI Southbank is currently closed due to COVID-19 situation, but is re-opening on 1 September.

Read more about the re-opening