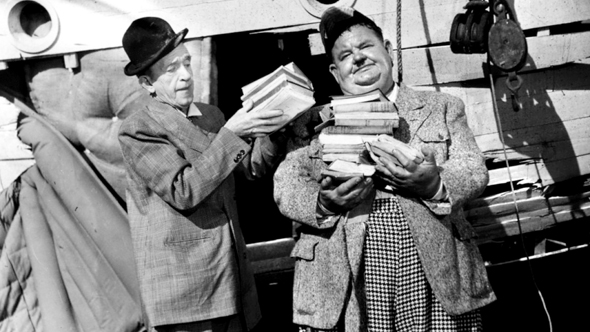 Laurel and Hardy aficionados won’t want to miss this rare opportunity to see ‘the Boys’ in their final feature.

Laurel and Hardy aficionados won’t want to miss this rare opportunity to see ‘the Boys’ in their final feature. This odd atomic-age comedy sees Stan and Ollie inherit a uranium-rich island that becomes a haven for lawless ruffians from every corner of the globe. Much maligned over the years, this troubled international co-production was plagued by disputes with the crew and ill-health for its stars; but it was a spirited attempt by the team to move in a new direction, and it remains fascinating viewing for fans. It screens here in a BFI archive print made from nitrate master materials. Plus Grand Hotel (aka Laurel and Hardy Visit Tynemouth, UK 1932, Dir JG Ratcliffe, 10min, silent): The team are rapturously received when they visit Tynemouth in 1932, and Stan clowns for the camera with his dad.

We are delighted to announce that this programme will now include previously unseen silent amateur footage of Stan and Ollie opening a Gymkhana at Eastwood Park, Giffnock, during their visit to Scotland in June 1947. We can also confirm that we’re going to screen the full length English version of the film which runs 98min, not 95min as listed in the BFI Southbank Guide.

Introduced by Glenn Mitchell, author of The Laurel and Hardy Encyclopedia, and Archive curators Vic Pratt and William Fowler.