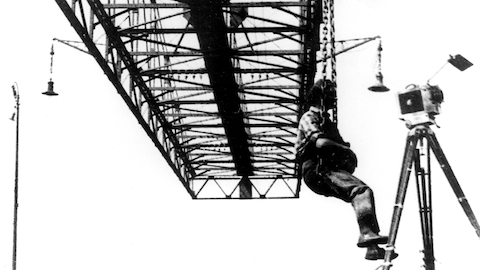 Dziga Vertov’s thrillingly audacious representation of a day in the life of the Soviet Union. Read more

Making its first appearance in the critics’ poll top ten, Dziga Vertov’s thrillingly audacious non-narrative silent film about a day in the life of the Soviet Union opens with a prologue announcing, ‘Attention viewers, this experimental work aims at creating a truly international language of cinema based on its absolute separation from the language of theatre and literature’. It’s a radical statement of intent for a film that still seems radically modern and pertinent today, 83 years on. Could its time have finally come?

This films runs c84mins, not 64 as published in the Guide. We apologise for this error.