Woman with a Movie Camera Summit powered by Jaguar

Reframing the conversation around women and film.

Passes for the Woman with a Movie Camera Summit will not be available to purchase after 5pm on Friday 16 July. Please purchase your pass before this deadline to be able to attend. 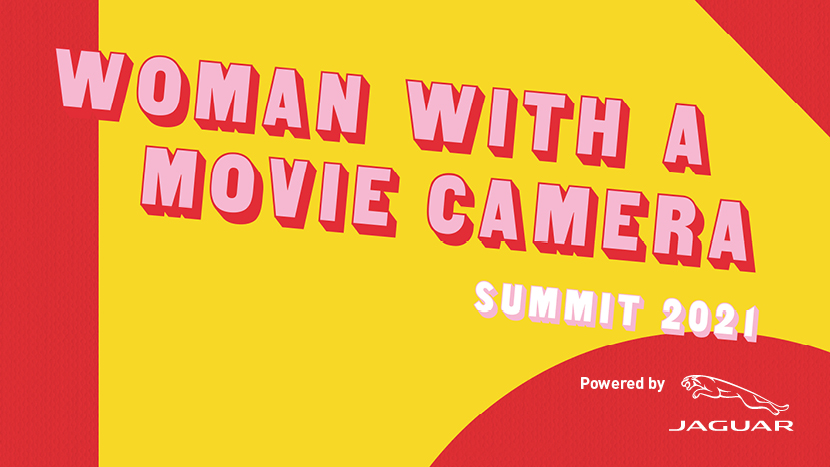 After a year hiatus the Woman with a Movie Camera summit returns and is going virtual for the first time, this year powered by Jaguar! Reflecting on the past year, we will be bringing you a programme focusing on revitalisation and rebuilding, as well as upskilling and throwing open film and TV industry doors. Packed with Q&As and panel discussions with filmmakers, curators and creatives, including interactive talks and workshops - all to be enjoyed wherever you are.

The evening before the summit starts, London based attendees can access reduced priced tickets to a Women with a Movie Camera Preview of the new restoration of Claudia Weill’s Girlfriends, and also a screening of Márta Mészáros’s The Girl, both at BFI Southbank.

Further guests and events to be announced. Check back here for programme updates.

Director Claudia Weill joins us to discuss her landmark 1978 Girlfriends, one of the first (and still one of the best) films to authentically portray the complexities of female friendship and life in your early 20s. The underrated classic is a true ‘godmother’ to Girls, Frances Ha, Broad City and many other film and TV shows about young women trying to find their way.

BFI NETWORK presents a curated programme of short films that were made or debuted during the pandemic featuring:

Video essay is a new form of filmmaking and film criticism aimed at analysing, exploring and studying the art of cinema. Leading video essayist Catherine Grant presents a live introductory talk to the world of video essays. With recent examples of video essays featuring women filmmakers, Grant will discuss the main requirements, key methods and recent developments in the exciting field of video essaying.

Have you already experimented with the video essay format and would like to discuss your work with others? For this interactive session, we invite up to 10 participants to share their video essay projects to get feedback on their work from leading video essayist Catherine Grant and fellow participants. Due to the session's time constraints, we ask all participants to submit their video essay work of up to 5 minutes (either in full or excerpts) by 9am on Friday 16 July. All submitted work with be circulated to workshop participants on Friday ahead of the summit. To register and for more details, please email Aga Baranowska.

The Rise and Fall of the Girl Boss Available from 12:00 Saturday 17 July

A panel of culture writers and film critics dissect the rise and fall of Girl Boss, from her shiny pop-feminist origins to her current status as the cultural archetype everyone loves to hate. The panel will get into the issues of girlboss feminism and also explore her recent iterations in film and television, including films like I Care a Lot and Cruella.

Each day of the summit there will be a live 'zoom social' in which attendees can embrace the awkwardness of meeting new people virtually and discuss some of the hot topics of the day’s sessions. The socials will be hosted and facilitated to ensure the spaces are respectful and fun, and that conversation never runs out...

Karina Longworth, creator and host of You Must Remember This, the hugely popular storytelling podcast exploring the secret and/or forgotten histories of Hollywood's first century, talks to Anna Bogutskaya about growing her research journeys into unearthing and telling the stories of many great ‘invisible’ women like pioneering producer Polly Platt.

Over the past year, some of the most popular television shows such as I May Destroy You, Normal People, I Hate Suzie, Adult Material and Bridgerton portrayed different types of intimacy, while in the industry we were rocked by further revelations around abuse of power on set/during auditions. We bring together four leading intimacy coordinators to spotlight their work on these television shows, and discuss why this work is essential for making film and television safe for everyone.

Actor and co-founder of The WonderWorks, Charlotte Riley discusses her work setting up the UK's first nursery dedicated to children of parents working in the film industry, and how she is calling on industry leaders to help achieve greater equality in film. Hosted by Nicky Bentham from Raising Films.

Kate Oates, the Head of Continuing Drama, BBC Studios, shares her experiences of working on the EastEnders storyline in which character Chantelle Atkins was killed by her abusive husband during the pandemic, and in particular how the team worked with Women’s Aid on the story and script.

A panel of film critics and culture writers reflect on Dee Rees’ exquisite debut film and landmark in Black LGBTIQ+ cinema, 10 years after its release.

Behind the Bylines: Times Up UK Critics Roundtable Available from 17:00 Saturday 17 July

Six UK film critics come together to discuss the professional and personal experiences of being a female critic in a still very male dominated field. Exploring topics such as: what criticism means to me; how much is a fair wage? What is the female gaze? And Twitter bio vs Reality, the roundtable will offer a vital insight into this side of the industry.

Gaylene Gould (The Space To Come) and Mia Bays (Birds Eye View) will host a live conversation-workshop exploring ways that cinema and its workers can begin to heal from the culture of male violence toward women. In this session participants will hear industry thinkers and explore practices that might begin to tackle the trauma embedded within cinema’s culture and our own bodies and stories.

Girls on Film present a panel focusing on what lessons are to be learned in the screen industries, particularly for women, from the pandemic. How can we seize the innovations we made to cope during lockdown and keep the best of them for the future? What has been revealed by the pandemic, how are these revelations changing the industry, and what is still left to do?

A panel of film critics and culture writers analyse the critical reevaluation of Jennifer’s Body, and the journey of Karyn Kusama’s film from ‘box office flop’ to cult classic, while pondering the tool kit for reclaiming other works.

Intrigued by the possibilities of emerging interactive platforms and experiential storytelling? Join this XR-focused session for an introduction to immersive technologies, and a look at the future of new forms while spotlighting two of the most exciting female creators in the field. Learn about their pioneering work across audio, social platforms, gaming, augmented reality, virtual reality, volumetric filmmaking and beyond.

Join this conversation, hosted by film critic Tara Judah, to discover and explore the work of trailblazing Hungarian filmmaker Márta Mészáros. With a six-decade career focusing on telling women’s stories, Mészáros has an important place in the history of cinema as the first woman filmmaker awarded a Golden Bear for Best Film at the Berlin International Film Festival for her 1975 film Adoption. This discussion will focus on Mészáros’ three key titles, Riddance (1973), Adoption (1975) and Diary for My Children (1984), all of which are available to watch now at BFI Southbank and later this month on BFI Player.

Nicole Davis presents a special live edition of Best Girl Grip, the weekly podcast interviewing women behind-the-scenes and below-the-line of the British film industry. Joining her will be cinematographer/director/writer Molly Manning Walker whose cinematography credits include Superhoe for the BBC, and Charlotte Regan’s upcoming Scrapper, and writing and directing credits include Good Thanks, You? and the BIFA nominated The Forgotten C. Molly’s debut feature film, How To Have Sex, is in development with Film4 and is being produced by Ivana MacKinnon and Emily Leo of Wild Swim Films. Molly was recently awarded the Next Step Prize by Semaine De La Critique for the script.

Each day of the summit there will be a live ‘zoom social’ in which attendees can embrace the awkwardness of meeting new people virtually and discuss some of the hot topics of the day’s sessions. The socials will be hosted and facilitated to ensure the spaces are respectful and fun, and that conversation never runs out...

Originating in K-pop fandoms ‘fan cams’ or ‘fan edits’ have exploded on social media in recent years. Being used to celebrate everyone and anyone from Timothée Chalamet to Parasite director Bong Joon Ho’s interpreter, Sharon Choi. They’ve also become an unlikely tool in online activism. But are they more than just memes and tokens of adoration? We bring together a mixture of culture critics/experts and fan cam filmmakers to discuss the practice, its origins, its relationship to other forms of fan worship and whether they should be considered an art in their own right.

Be Manzini, an award winning poet and director of Caramel Film Club, leads an interactive film poetry workshop. Manzini will discuss her creative writing practice before inviting participants to reflect on their cherished cinematic experiences using poetry and creative writing as a vehicle to build a monument to those memories.

Invisible Women present a fun and chatty journey through the history of film collectives, from early networks between female filmmakers at the birth of cinema, through the swinging second wave collectives of the 60s and 70s, the radical workshops of the 1980s, the Riot Girl VHS networks of the 90s up to the present.

For women of any age new to the tempestuous world of film fandom, there are plenty of barriers in place. The venues championing independent film are intimidating, the voices in criticism and online discussion mostly male. This panel will explore the emergence of new online spaces which are inclusive, welcoming and affirming for female and non-binary voices. What does the ideal online community look like, and where/how can we set about building it?

Film TikTok is a rapidly growing community on the video-sharing app and a home for speedy but creative film discourse. From scene breakdowns and recommendation videos to mini video essays, supercuts and fan edits. We talk to two creators and a self-described TikTok scholar about their work in this space.

Want more? Check out the free-to-attend The Rise of Film TikTok virtual panel at Cinema Rediscovered on Friday 30 July.

The past few years have seen exceptional films emerge from the Nordic regions, which featured bold, complex and brilliant women whose characters made an impact in their country and beyond, defied political obstructions and confronted inequalities. Our panel will bring together three Nordic industry figures to explore the rise of these progressive, honest, feminist narratives in Nordic cinema and their bold impact in the global film landscape and discuss some of the films that really capture this movement, including Tove (2020), The County (2020), Hope (2019), And Breathe Normally (2018), and Britt-Marie Was Here (2019).

Know your Coppola from your Campion? Your Denis from your Dash? Well, round up a team because we are wrapping up the summit with a good old fashioned Zoom quiz. The rounds will range from easy-peasy to a-little-knowledge-helps but will mainly be about having a good time and celebrating women in film and television. And of course there will be prizes!