The first of three acclaimed collaborations between director Joseph Losey and writer Harold Pinter, this memorably mordant study of class, sex, conspiracy and corruption was a landmark in the development of British cinema. 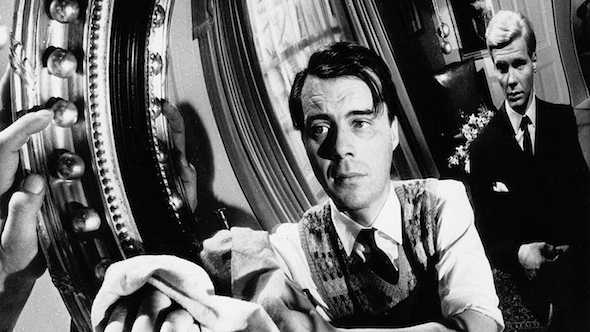 When Hugo Barrett (Dirk Bogarde) is taken on as ‘gentleman’s gentleman’ in the Chelsea home of indolent aristocrat Tony (James Fox), all seems to go well until the playboy’s girlfriend Susan (Wendy Craig) takes a dislike to the perfectly efficient employee. Then Barrett persuades Tony to hire his sister Vera (Sarah Miles) as a live-in maid, and matters take another turn for the worse... Skilfully adapting a postwar novelette by Robin Maugham, Pinter and Losey created one of the definitive depictions of the English class system in all its fading, decadent glory, observing the shifts in power between moneyed master and scheming servant with beady glee. Losey’s baroque direction makes eloquent use of cinematographer Douglas Slocombe’s subtle lighting, Richard MacDonald’s meticulously designed interiors and John Dankworth’s score, while the cast is uniformly fine, Bogarde’s performance in particular being so strong that it transformed his career.

The screening on Wednesday 27 March, NFT2, will be introduced by Marek Losey.