An extraordinary projection event from the Austrian filmmaker, who has been a vital force in cinema for more than half a century. 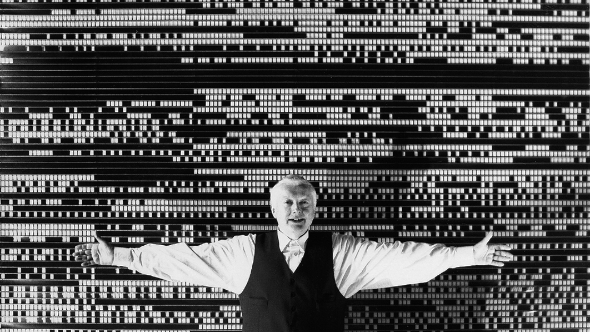 The Austrian filmmaker Peter Kubelka has been a vital and uncompromising force in cinema for more than half a century. In a body of work that lasts not much more than an hour in total, he condenses and articulates the essential qualities of analogue cinema, distinguishing film as an autonomous artform. His 1960 film Arnulf Rainer, composed only of the purest elements of light and darkness, sound and silence, remains one of the most radical achievements in film history. In response to that earlier work, his new film Antiphon was revealed in 2012 as part of Monument Film, a powerful testament to the entire medium. With two 35mm projectors situated in the auditorium, each film is screened individually, then combined as double projections, both side-by-side and superimposed upon each other.

Throughout this extraordinary projection event, Peter Kubelka will discuss his theories, explaining the differences between film and digital media, and articulating his belief in the survival of cinema.

Curated by Mark Webber. Presented with the support of Austrian Cultural Forum. This performance was originally scheduled for the 56th BFI London Film Festival last October.

Audience members with tickets for the original event should contact Box Office for an exchange. Further tickets available at £11, concs £8.50 (Members pay £1.50 less).